In the previous chapter I have briefly referred to the main methods used for treating skin cancer. The purpose of this chapter is to briefly expand on some of these treatments and explain the logic that underpins them. There is a need for such explanations for the following reasons:

Two caveats are pertinent before we start. First, what follows refers to NMSC and not melanoma —the management approach to melanoma is very different. Second, if you are not certain of what you are attempting to treat, do not proceed but refer to somebody with the appropriate expertise.

The most obvious treatment is surgical excision. This is the preferred option for most basal cell carcinomas and squamous cell carcinomas. It is usually curative and allows the pathologist not only to confirm the diagnosis, but also to examine the surgical margins to ensure that the tumour is indeed completely excised. The latter is important because for some tumours, particularly BCCs it may be difficult to determine the margin of the tumour on clinical examination alone. Usually the margins of an SCC are easier to see, but because SCCs can metastasise it is very important to ensure it is completely excised — if it isn’t, then a further excision is almost mandatory.

This technique involves literally scraping away the tumour with an instrument called a curette (Figure 6.1), and the wound is allowed to heal from the base up in much the same way a graze on the knee may heal following mild to moderate trauma. The wound is cauterised post curettage to secure haemostasis and destroy any tumour that has not been scraped off. The material that is gathered with the curette prior to cautery is sent for histopathological examination. 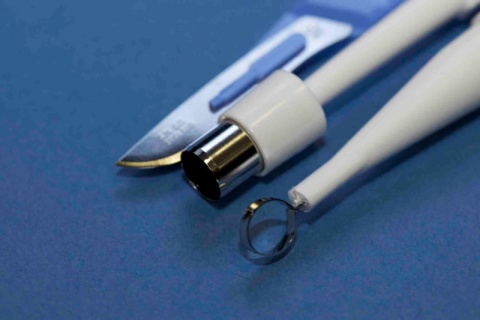 Figure 6.1 : Picture of surgical instruments
Scalpel (left), 8mm biopsy punch (middle), ring curette (right). Punch biopsies come in various sizes between 2mm and 8mm. They are useful for taking incisional biopsies, or even excisional biopsies of small lesions. They are held vertical to the skin surface, downward spiral movements applied, and the base of the resulting lesion cut so that a solid cylinder of tissue is available for pathology. The ring curette is a circular sharp blade which is pulled across the lesion such that the plane of the circular blade is close to parallel to the skin’s surface. More than one pass may be needed and the normal anatomy will be disturbed — you cannot use this technique to ensure clearance of a tumour’s margins.
Top

It is not uncommon for some BCCs to have been treated by C+C or some other nonexcisional treatment. Similarly it is not unheard of for an excision of a BCC to be inadequate in that the pathologist reports tumour extending to the excision margins. The approach to such patients is different from virtually all other skin cancers and cancers at other sites, and it is worth understanding why this is so.

Imagine that 5% of BCC are incompletely excised. For most cancers we would expect 5% of the cancers to return and of course at some stage, if not already, to metastasise. For BCC this does not appear to be the case. If we follow up BCCs that have not been completely excised only a fraction recur. Because BCC rarely metastasise this is often a legitimate approach—if the tumour recurs we just treat it again with excision. It is this logic that underpins the use of C+C for treatment — with C+C we never know if all the tumour has been removed because the pathologist cannot examine resection margins. We are relying on the fact that we could always re-excise the tumour if it did actually recur. This is, of course, not an approach you would follow for say breast cancer or melanoma.

However this ‘wait and see’ approach is easily abused. A tumour close to the eye if allowed to remain undetected will eventually invade the orbit or track along the branches of the trigeminal nerve. Similarly BCCs in some sites (e.g. the nose) are known to be very hard to deal with if they do recur.The bottom line is that C+C of some well defined BCC at certain sites may be adequate treatment—but the default treatment should always be excision.

Cryotherapy destroys tissue because of the formation of ice crystals in the cells that have been exposed to liquid nitrogen (-180Cº). It is best suited to superficial lesions such as some types of AKs, IEC, or superficial BCCs. Cryotherapy is painful and is poorly suited to lesions that are thick as it will leave necrotic ulcers that take many weeks to heal. The morbidity from cryotherapy may exceed that from surgical excision. In the authors opinion it is often used on lesions that would be better treated with excision. Obviously, because no excision biopsy has been performed it is not possible to ensure all the tumour has been destroyed. If you are not certain of the diagnosis do not use cryotherapy. 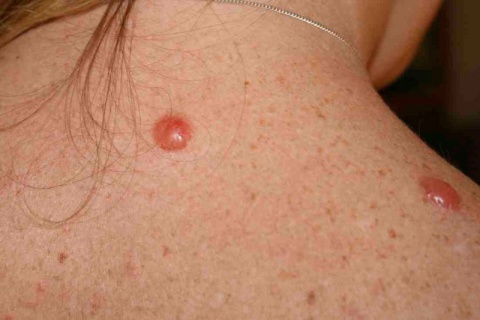 Figure 6.2 : Cryotherapy
This young women had two superficial BCCs treated with cryotherapy 24 hours earlier. Note the two blisters at the site of the cryotherapy treatment. Cryotherapy may have a significant morbidity especially if the lesions treated are not very superficial.
Top

There are now a range of topical chemotherapeautic agents that are useful in particular clinical contexts.

As a general rule, all the above topical agents have only a marginal role in the treatment of most NMSC.

The vast majority of BCCs can be managed with simple excision. However some BCCs, particularly morphoeic BCCs, at certain sites such as on the nose or close to the eye, can be surgically demanding because the margin of the tumour is difficult or impossible to define clinically, and in these sites there is a need to conserve tissue as much as possible. Mohs’ micrographic surgery is a specialist type of skin surgery in which the dermatologist excises the tumour paying particular attention to the orientation of the specimen which is then sectioned horizontally following frozen section staining. These slides are then examined microscopically, and the tumour margins mapped, and further surgical excision undertaken only for those parts of the tumour which have not been excised. The excision is therefore guided by microscopic examination (hence the name) of the specimen with the patient waiting while each round of excision is examined under the microscope. The purpose is therefore twofold, first to ensure the tumour is removed, and second to allow maximum conservation of normal tissue at a body site of cosmetic and functional importance. Usually the same dermatologist performs the surgery and examines the slides.

Radiotherapy used to be the most commonly modality of treatment for BCC and many SCC. Today it is used much less commonly. In general, surgery is more effective and the cosmetic effect is better with less morbidity. Radiotherapy is still used in addition to surgery for some aggressive SCCs.